How to Size the Battery Bank

Now let’s dig into great details on these variables and explain how to put them all together so you can accurately determine the battery capacity needed and create the battery bank for your solar system.

When you buy solar batteries to make up the entire battery bank, you have a few options. The most common battery type for off-grid PV systems is a 12V nominal solar battery. You then take these batteries and wire them in a series-parallel arrangement to achieve the voltage and capacity characteristics you’re after.

There’ll always be some losses associated with turning DC into AC, which is why no inverter can deliver 100 percent of the energy from a battery bank to the loads. However, if the inverter can be more efficient at inverting, the battery bank can be smaller. Consider the AC loads attached to the proposed inverter and the inverter’s size (in terms of power output) in order to maximize efficiency levels. What I mean by this is don’t put in a 5kW inverter if all the client will ever draw is 1kW. Instead, try to match the loads and the inverter. 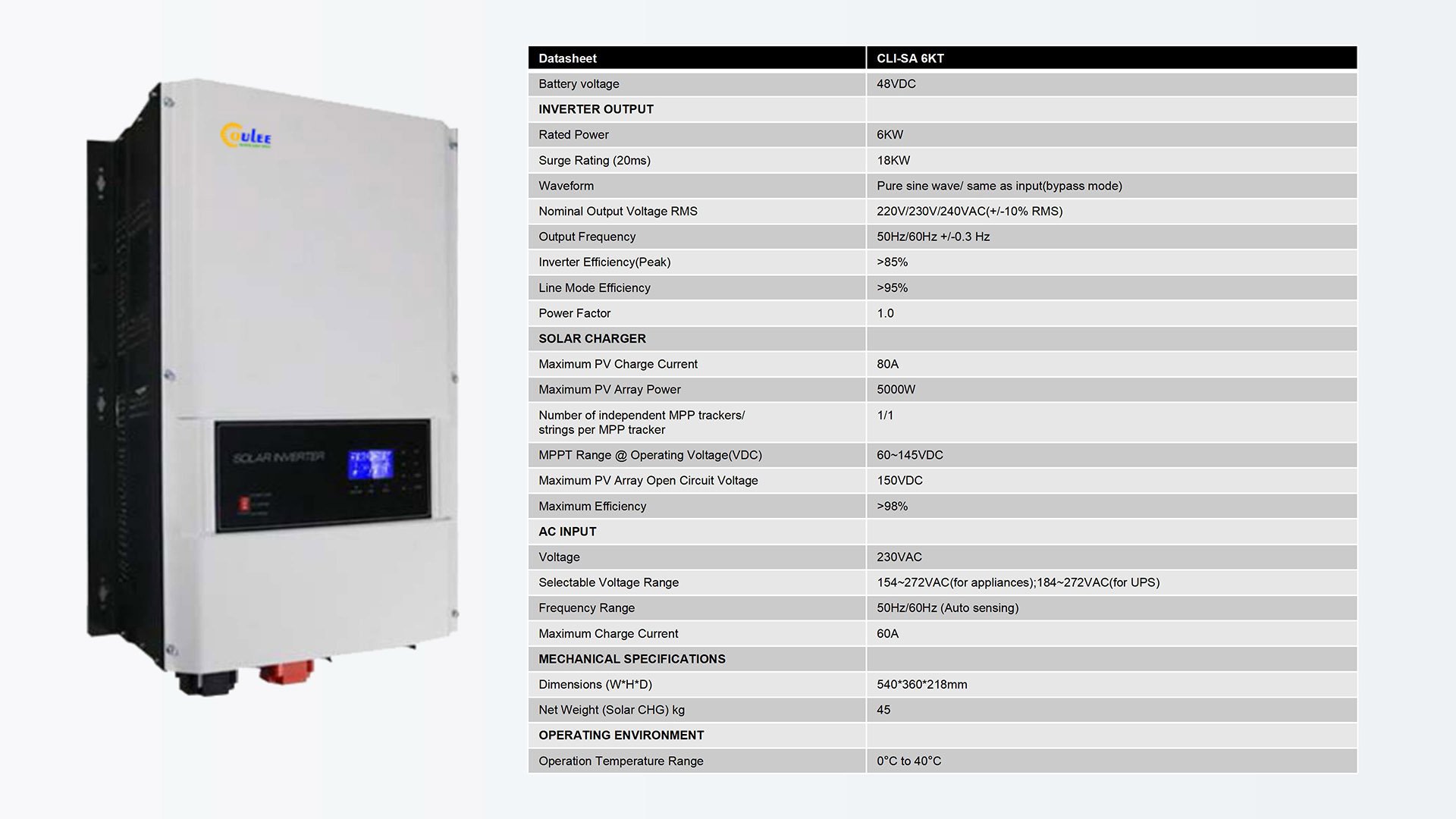 Inverter manufacturers list the efficiencies of their units on all of their spec sheets. What you need to remember is that the number listed by the manufacturers is the peak efficiency value. As such, it’ll almost always be an impressive value that’s somewhere near 97 percent. Although 97-percent efficiency may be possible, it’s not achievable on a frequent basis. Most battery-based systems are regularly closer to 90-percent efficiency. Like all variables, this percentage will vary, but 90 percent is a fair value that represents a typical operating efficiency for an inverter.

The days of autonomy 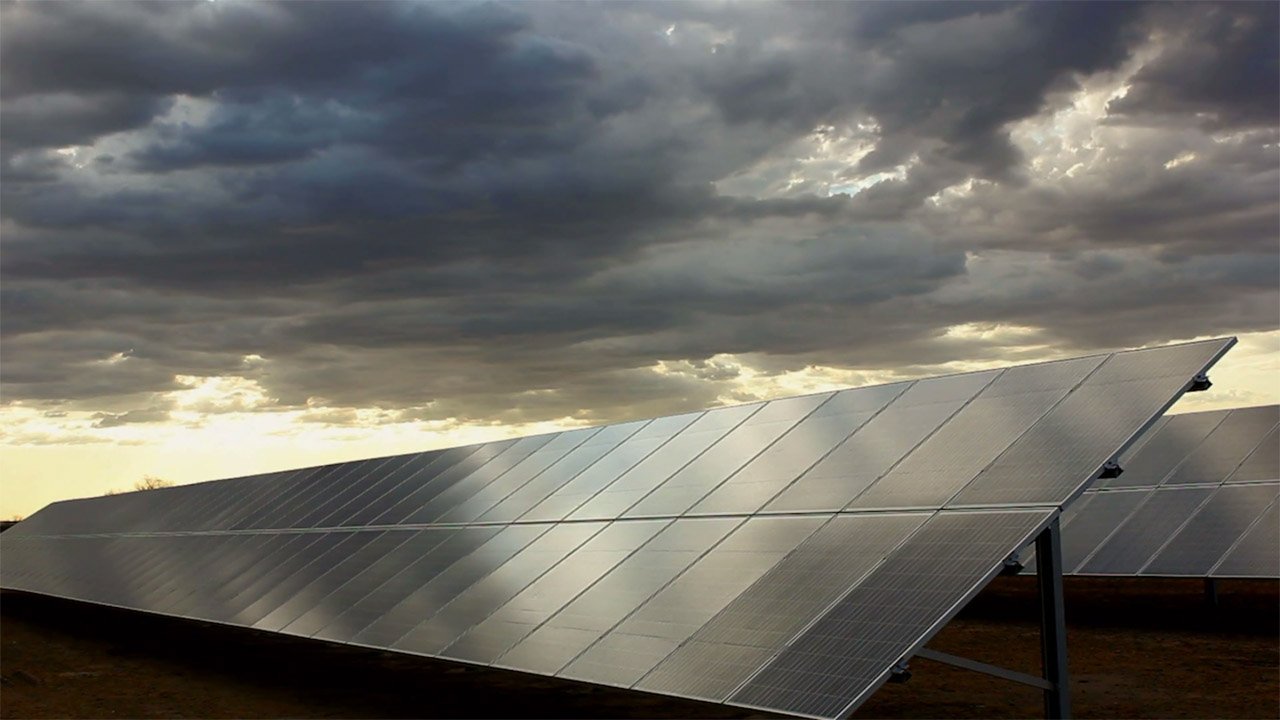 The local climate usually plays a major role in this decision, as does the available budget for the project. As you can imagine, the more days of autonomy, the more batteries you need, and the higher the system cost climbs.

The temperature used for battery operation

The temperature that batteries operate at affects their capacity. The colder a battery is, the less capacity it can deliver. Why? Because the efficiency of the chemical reaction occurring inside the battery increases and decreases at different temperatures. Battery manufacturers publish the exact effects that temperature has on their batteries, so you should be able to find that data for the battery you’re considering in order to apply the correct temperature derate factor (the percentage of the capacity you can expect from a battery based on the temperature). 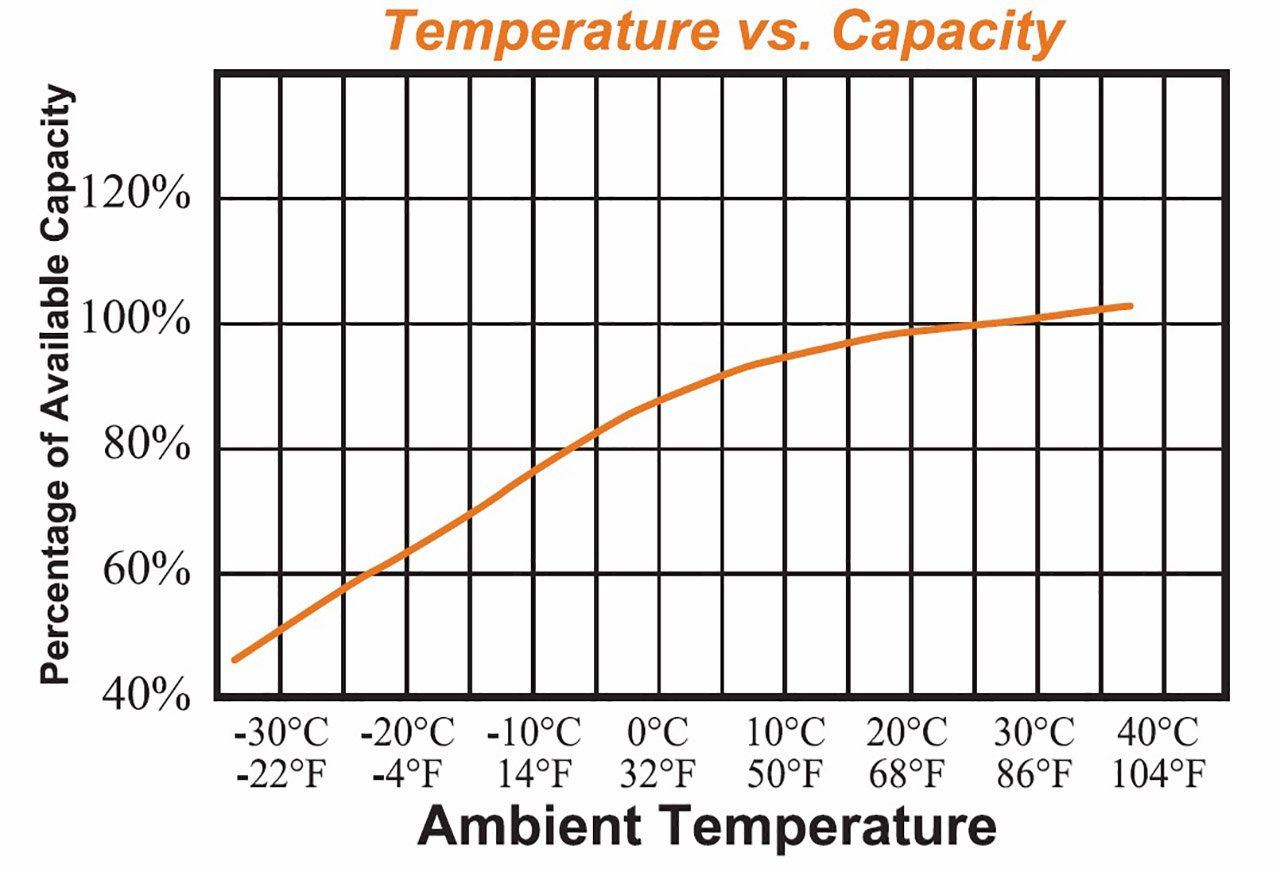 Because most systems use lead-acid batteries and the technology is pretty consistent among the different manufacturers, we’d like to recommend you use a single temperature derate factor: 90 percent. This percentage corresponds to a battery temperature of approximately 60 degrees Fahrenheit (15.5-celsius degree) and indicates that at that temperature, the battery will only be able to deliver 90 percent of its rated value (the battery’s capacity at 77 degrees Fahrenheit or 25-celsius degree).

Depth of discharge (DOD) is the amount of energy drawn from the battery bank; it’s generally given in terms of a percentage. The higher the DOD value, the more energy has left the battery bank. As with days of autonomy, DOD can (and should) be dictated in the system-design process because it affects the overall size of the battery bank. When you look at a typical chart provided by battery manufacturers that shows the number of cycles versus DOD, it becomes apparent that the smaller the DOD is, the greater the number of cycles (a cycle is a period from when the batteries’ capacity is drawn down to when it’s recharged). Although this fact probably isn’t surprising, it doesn’t mean you should try to baby the batteries and design a system around a small DOD.

What you really need to do is evaluate where on the curve the maximum amount of energy will be delivered over the battery bank’s life. To determine the ideal DOD to use with a battery bank, look at the whole picture in graph form; a graph shows a battery bank’s number of cycles against the percentage of its discharge. The figure below shows an example. 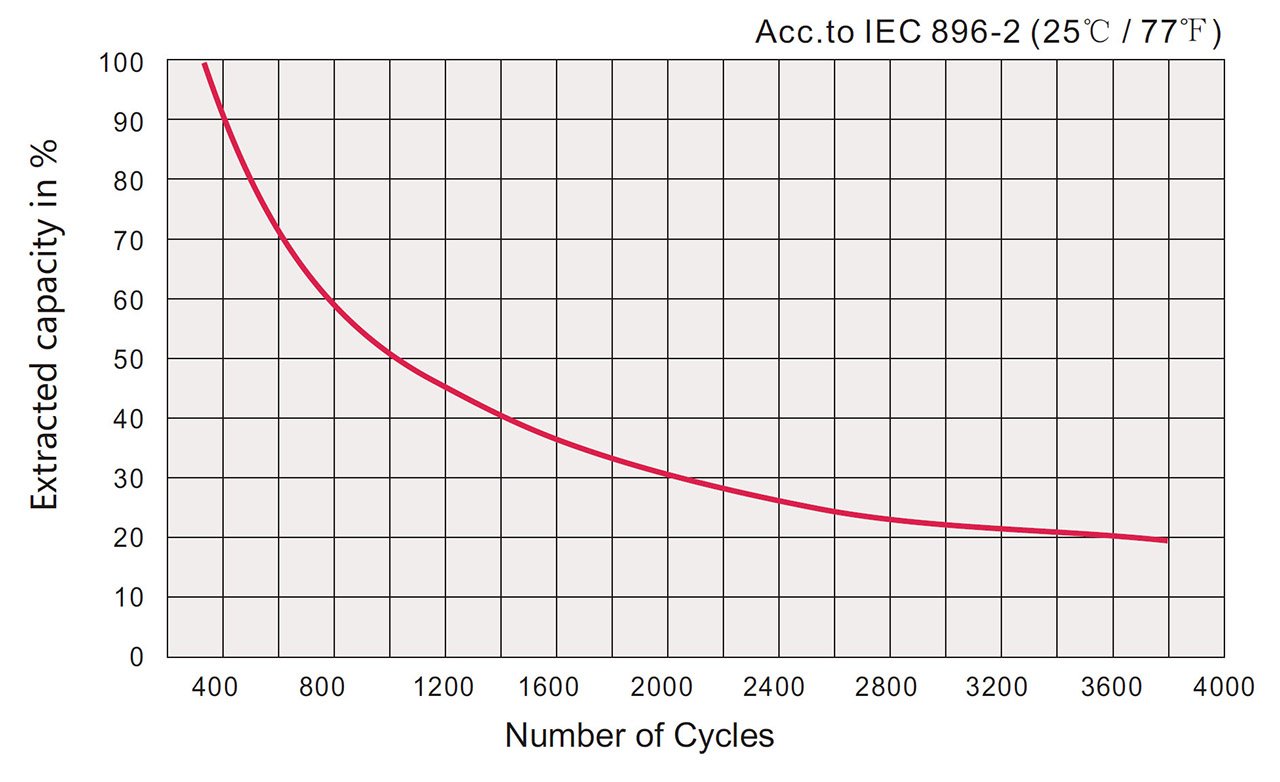 Even though the idea of reducing the DOD looks good at first glance because it increases the overall life of the battery bank, it results in fewer amp-hours delivered. Because the battery bank’s job is to store and deliver energy, you may want to consider discharging the batteries more often to maximize your investment (and reduce the system’s initial cost). When evaluating the DOD, most battery bank designs use a value that’s somewhere between 50 percent and 80 percent, but there’s really no exact “right” answer.
You have to evaluate the options and make a suggestion based on the information in the charts from the manufacturer of the batteries you use in the bank.

Be careful to never exceed an 80-percent DOD (we are talking about lead-acid batteries) in your design. Repeatedly reducing a battery bank’s capacity more than 80 percent harms the batteries and causes premature failure of the bank.

For any battery-based system you install, you need to look at battery bank nominal voltages of 12, 24, or 48VDC. These voltages correspond to the inverter input requirements for the majority of commercially available inverters.

Systems using inverters that produce relatively small AC power levels (less than 2,000 W) may be able to justify using a 24V battery bank, but with the advancements made in inverter and charge controller technologies, 48V battery banks have become very popular. (Note that the wattage levels listed here are by no means absolute values. Rather, they’re common guidelines you can follow. They represent the goal of keeping conductor [wire] sizes down by increasing voltages and
reducing current values.)

Figuring out the battery capacity you need

For the purposes of providing an example, let’s use 5kWh as the average daily energy consumption.

Step 2. Divide the watt-hours value from Step 1 by the estimated inverter efficiency.

This step increases the required capacity due to the fact that an inverter loses some of its stored capacity during the process of turning DC into AC (10 percent loss is common). Continuing with the example, you find that 5kWh ÷ 0.9 = 5.56kWh (90 percent is a fair inverter efficiency to estimate).

Step 3. Add any energy consumption from DC loads to the watt-hours value in Step 2.

Step 4. Multiply the energy value from Step 3 by the desired days of autonomy.

Doing so tells you the amount of energy the battery bank needs to store (two or three days is a pretty typical value). My example here wants three days of autonomy, so that makes the new energy value 5.86kWh × 3days = 17.58kWh.

Step 5. Divide the value calculated in Step 4 by the temperature compensation value provided by the battery manufacturer.

Step 6. Divide the value from Step 5 by the allowable depth of discharge.

Step 7. Divide the value from Step 6 by your desired nominal voltage for the battery bank.

Batteries are rated in amp-hours, not watt-hours. By using the nominal battery bank voltage, you can determine the required amp-hours for the battery bank (use a 12V, 24V, or 48V value here). The system in this example will be installed at 48V to keep the current values at a minimum and reduce the conductor sizes. Here’s the math: 39.08kWh ÷ 48V = 0.815kAh, or 815Ah.

As soon as you know what the capacity of the battery bank should be and the nominal voltage, you’re ready to evaluate the different battery options and decide which one is best for the battery bank you’re constructing. 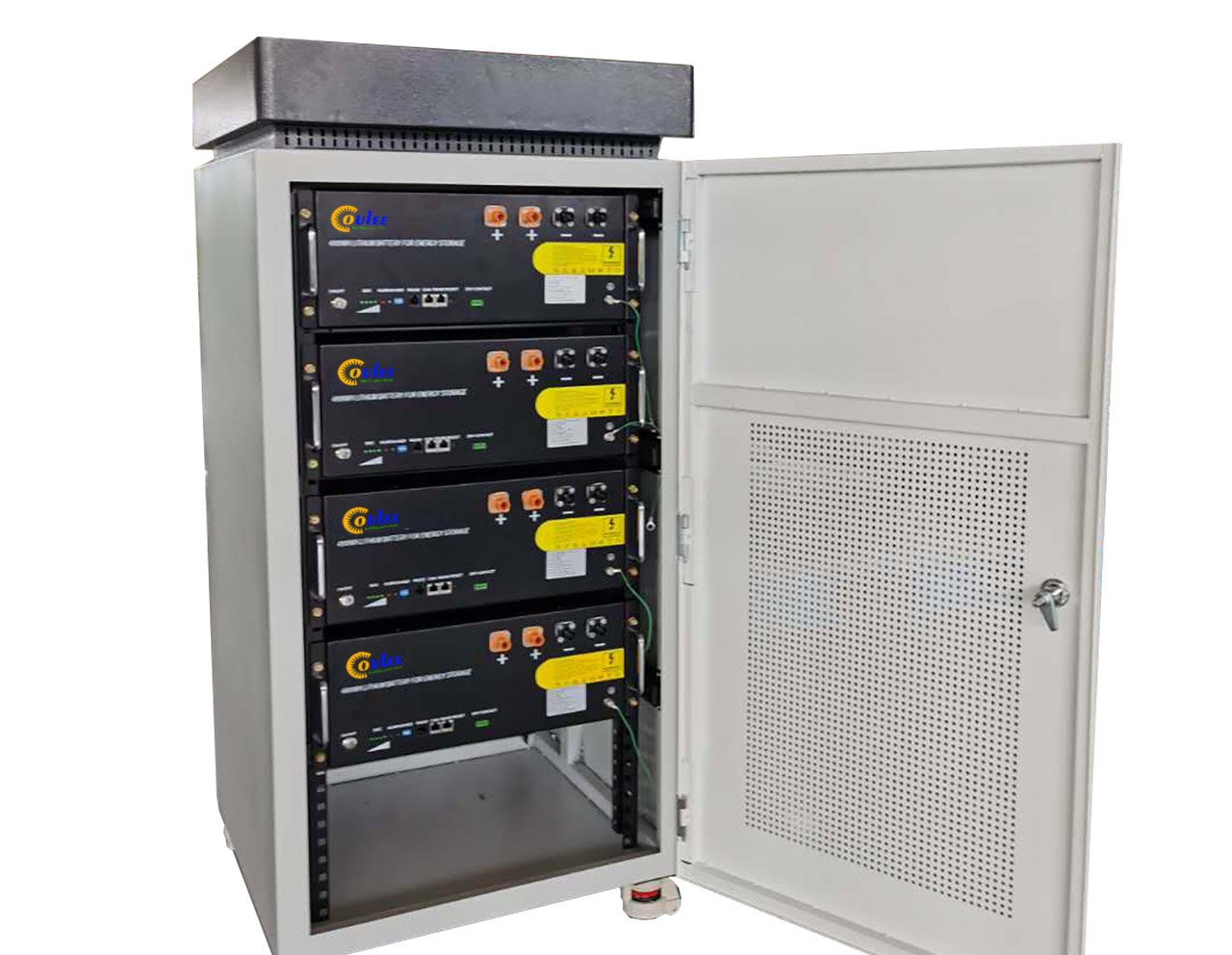 To determine the number of batteries required in a string, divide the nominal battery bank voltage by the individual batteries’ nominal voltages.

From the example, we calculated that the battery bank would need to have a capacity of 815Ah at 48V. And let’s say we want to have two strings of batteries in our bank, we need to look for a battery that has 408Ah (which is difficult to find, so we may need to settle on a battery with 400Ah. Batteries with this level of capacity are commonly found in 6V nominal options. So if you’re going to wire a bank for 48V and each battery is 6V, you know the battery strings should be eight batteries long. Here’s the math: 48 V ÷ 6 V = 8 batteries per string. 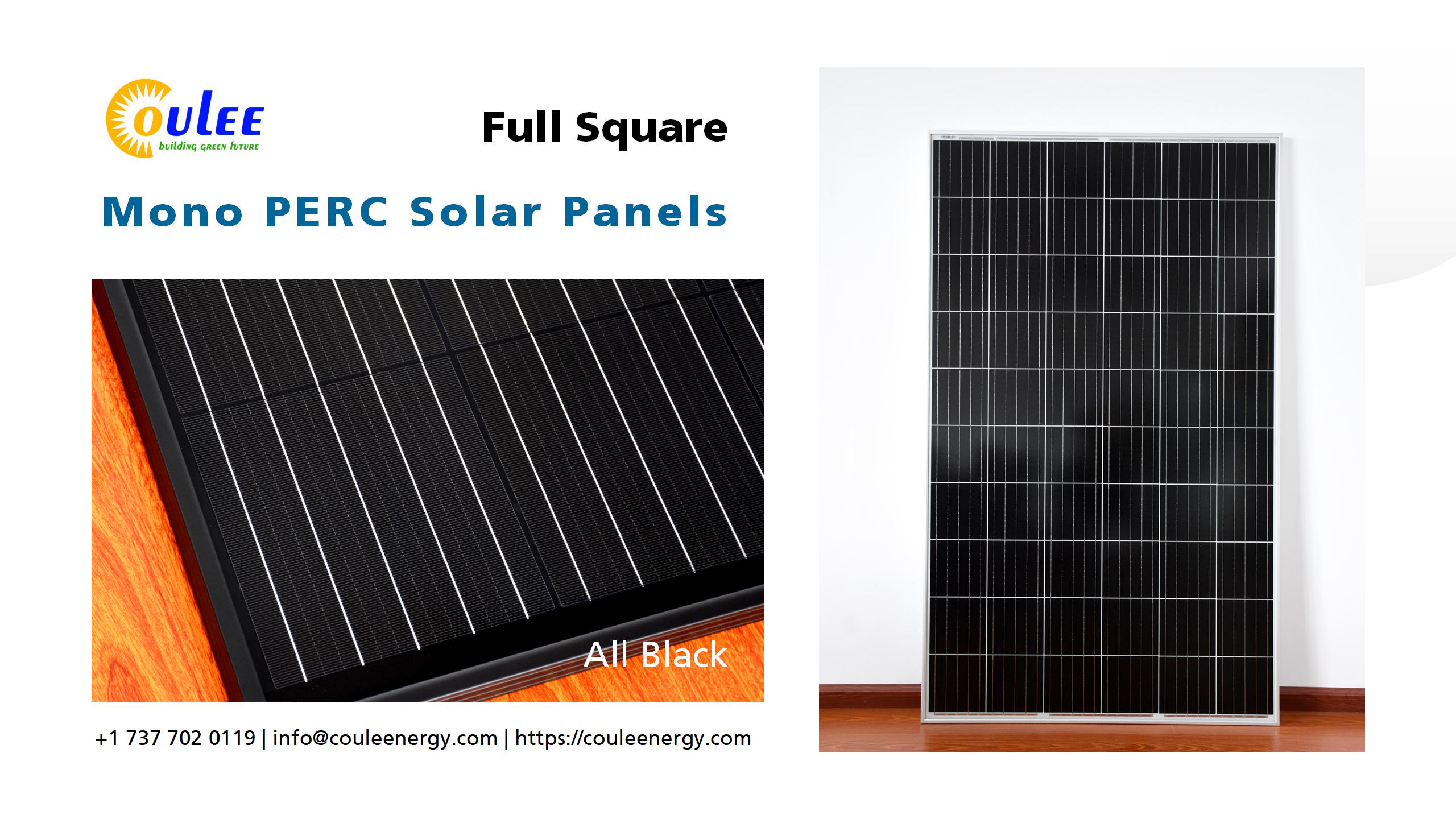